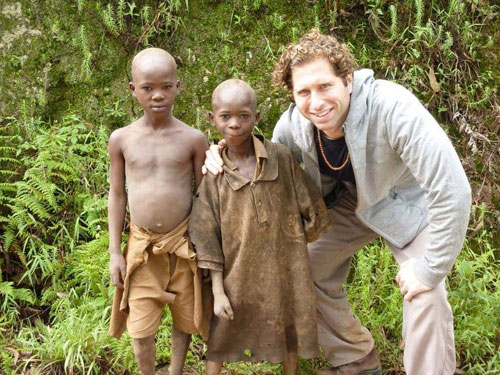 I believe everything happens for a reason. I was leading a Yoga and Service retreat to Peru over Christmas and New Years when by sheer grace the bus that was supposed to take us to Machu Picchu was going to be several hours late to pick us up. The delay was frustrating, but more importantly it was an intervention of fortune, because it opened the door to a conversation with Frank Andolino, a retreat participant who happened to be the founder of Kageno Worldwide. It was in that conversation, that Frank told me about his work with the foundation and invited me to travel with him to Rwanda to teach yoga in a remote village where the non-profit had been working for many years.

Without hesitation, I accepted Frank’s offer to join Kageno’s mission to transform impoverished communities into places of opportunity and hope. I immediately signed on to take an expedition to Banda Village, which like so many other communities in Rwanda, is shadowed by HIV/AIDS, extreme poverty, lack of education, a dearth of safe water, rapidly deteriorating ecosystems, and last but certainly not least, ethnic genocide.

Before meeting Frank I had spent over 15 years participating in service and learning projects throughout Africa and other countries, but nothing could have prepared me for the dichotomous adventure that was about to unfold before me. Despite stories of poverty and suffering, the real Africa is the story of its people, with a zest for life and a sense of humor; people who struggle for a better life in spite of all the odds against them. All of Africa is truly Kageno, a place of hope.

Only one month of preparation and anticipation zoomed by and suddenly it was a freezing February day in New York City. Falling snow hid the sky above us and the tarmac of the runway below. The jet engines revved, the plane gained speed, and as we left the ground, a warm energy of enthusiasm and wonderment surrounded my being. I felt held and supported by the revelatory power of Consciousness. My whole life, I had prepared diligently for this moment. Now, lifting out of New York, I was ready to embrace the next steps in this evolutionary dance of existence. The fire inside of me, fueled by my dedication to a service, the highest yoga, was burning brighter then ever!

Immediately upon landing in the Rwandan capital of Kigali, I visited the Genocide Museum to learn more about the 1994 genocide, in which 800,000 ethnic Tutsis and politically moderate Hutus were brutally slaughtered. The horror of it all affected me deeply. I prayed for hours at the nearby mass graves of genocide victims. Exhausted and deeply moved, profound nightmares kept me awake until dawn the next day. All families in Rwanda have been scathed by the genocide, and every cell of my being could feel the deep despondency in the air. It was clear that the amount of healing needed was unfathomable.

After my morning meditation the next day, I had a refreshed perspective. I realized how the story of Rwanda is truly an amazing epic of hope and healing that demonstrates the radical self-transformation of a shattered and shell-shocked country into a vibrant, safe, prosperous and energetic nation. The impressive courage and dignity of the genocide survivors, as they diligently work to rebuild their lives two decades later, is proof that the strength, beauty, bravery, energy and determination of Rwanda and its 8.5 million people is extraordinary. I felt totally grateful to be in one of the most gorgeous countries in the world, and I was open and spacious, ready to receive all the blessings from the land of a thousand hills. Just 48 hours in Rwanda, and I was imprinted with a new perspective and expanded worldview. I had deeper clarity about my highest dharma: to serve this planet unconditionally with dedication, love and light. I was ready to head out to the bush and start learning from the villagers in Banda, the small gem on the periphery of Nyungwe Forest National Park. 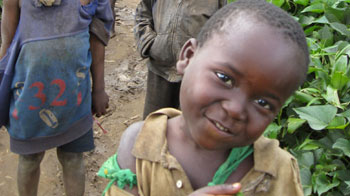 Offering yoga to a village that has so many complex issues brewing simultaneously might not seem judicious, but I hoped that the power of the practice could give the people a therapeutic tool toward overcoming the debilitating and disempowering effects of post-traumatic stress disorder. Much to my delight, my intuition was correct. 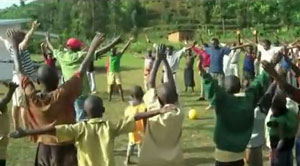 After spending a few days getting acquainted, it finally came time for the first yoga class. Everyone gathered outside on the village’s makeshift soccer field, surrounded by the jungle, and nearby, a roaming cow or two. I paused, shut my eyes, went to the dwelling place of the heart, and without fear, trusted infinitely that whatever I was going to attempt to offer would be openly received.

QUESTIONS ASKED BY THE PEOPLE OF BANDA VILLAGE:

I did not speak Kinyarwandan, but I was able to teach energetically with my eyes and heart – with every sense and emotion I embodied, for that matter. And, having a translator really helped! Distilling the meaning of yoga down to something translatable, comprehendible and meaningful came more easily then I had imagined. I taught the villagers that we do yoga for the fun of it, to stay healthy and to gather community. Everyone responded with joy and delight, as we moved together, support and held by the practice of yoga, playing together for the delight of it! People of all ages, men and women and children, were all laughing and trying to do their best. Everyone taught me so much and I was honored to offer something simple in return for the hope, energy, and sense of community that they offered me.

Each moment of the journey filled me with gratitude for my teachers who have inspired me to work to manifest my truest heart’s delight. I will always be grateful to have the people of Banda village as my teachers. Like all brilliant educators, my friends of Banda explained, simply through their actions and their lives, some of the most important lessons ever, including what it means to personify true hope and gratitude. The infectious smiles and hugs I received in Banda left me longing for more adventure, creative expression, and connection, with a deep desire to share the experience with a group of my students and friends.

It is with that clear intention, that I now offer YOU the opportunity to experience the abundant joy of service firsthand, in your own body and from your own perspective. You are cordially invited to join me, and Frank Andolino, for radical expansion this summer, as we lead a small group of yogis on a Service and Yoga retreat to Banda village. Encounter for yourself the abundant magic I am sure my words here have only barely described.

THE BIG THINGS I LEARNED:

If you can’t join me in Rwanda, look closer to your home to make a difference. Who could use compassion and support in your city, your part of the world, your country? Where is there suffering you would like to see eased? That’s the yoga of service, the ultimate yoga of love.

What are you going to do when you get off your mat and into the world today, tomorrow… or this summer?