On Hurricanes and Realizations:

Living in downtown New York City I was hit hard by Hurricane Sandy.

Not because its brute force knocked out my electricity for days. Not because Sandy turned my Tribeca neighborhood into a rubbish-strewn, blacked-out, evacuated community. Not because, despite my best efforts, it robbed me of my comforts, livelihood and income for awhile.

Hurricane Sandy hit me hard because it forced me to address the sharp and sad reality that we sometimes overlook or cast aside those who are less fortunate.

Hurricane Sandy revealed the truth that we too often care about inconsequential things instead of figuring out what truly matters and then taking action.

Hurricane Sandy hit me hard because it brought me intimately, frighteningly and maddeningly face-to-face with the devastation that occurs when we fail to do our duty and moral obligation to the forgotten and overlooked who are standing right in front of us — invisible to us.

Hurricane Sandy brought into my life a foul-smelling and seemingly degenerate street person in his 60s named Derek, whose home is a park bench across from my apartment building in one of the wealthiest areas of New York City. While many of the people around me seemed only concerned with themselves, exemplified by the scramble for downtown dwellers to find uptown rooms, so they would not miss electric and internet access, Derek barely survived the hurricane on the streets of downtown Manhattan.

Amazingly, notwithstanding the neglect and actual ire of police and paramedics, having no place for days to relieve himself except in his own clothes, and no place to get a drink of fresh water, Derek survived. Despite the crippling effects of his fear and sense of shame that prevented him from being able to find a place to weather the storm, Derek made it out alive…but barely.

This story started on Sunday Oct. 28, when I posted this picture to Facebook with the caption “Walking through City Hall Park, reminded how grateful I am to have a roof over my head with this crazy storm coming. Let’s keep it in perspective.” 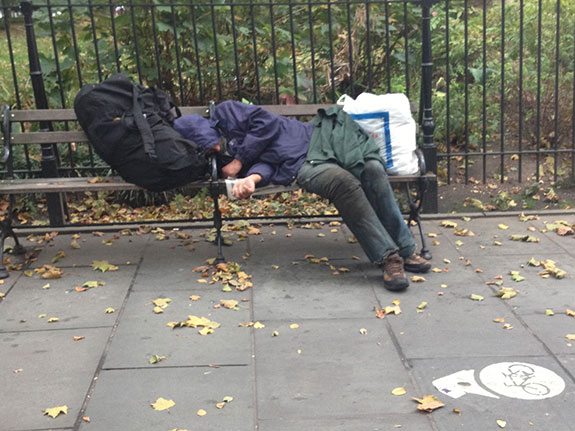 On Monday, Derek was still living outside, as the winds were picking up and Sandy was rolling in. I asked him if he needed help; he said he didn’t even know a serious storm was coming. Gazing into my eyes, he said simply and calmly that if a storm were on the way, “I might die, I guess. I am not very strong. I am a normal guy who just had bad luck, and I don’t know what to do or where to go.”

I brought him food and water and then walked him across the street to a Bank of America, where I used my banking card to give him shelter in the ATM lobby.

Later walking my dog one last time that night before Sandy tore through the city, I saw Derek back on the street; he’d been kicked out of the ATM lobby. I said I’d let him back in, but he refused, as he didn’t want to get arrested. I spoke with a cop down the street who gave me his word that he would call an ambulance and take Derek to a hospital. It never happened.

Derek spent the entire Monday night, the apex of Hurricane Sandy, outside right in the thick of the storm. By Tuesday morning he was barely standing. But he was in fact standing — largely because he was unable to sit; he couldn’t bend his knees. I called 911 to get him help. An ambulance came … and went. The paramedics said Derek’s case was not an emergency. I tried to put him in a cab to take him to a shelter; the driver refused to take him in – Derek had, after all, been relieving himself in his pants for three days straight.

Tuesday night, I set him up again with food and water and again called for medical care. The paramedics promised me they would help. I was incredibly disappointed and saddened to go outside Wednesday morning to see Derek standing in the same spot, in the same position, exactly were he’d been the day before.

That’s when I posted this to Facebook: “Sick to my stomach. This man is homeless and sick in Tribeca and no one is helping him. Have given him food and water for three days and called ambulance twice to take him to a hospital and they left both times saying it’s not urgent. This is NYC. Can’t believe this!” 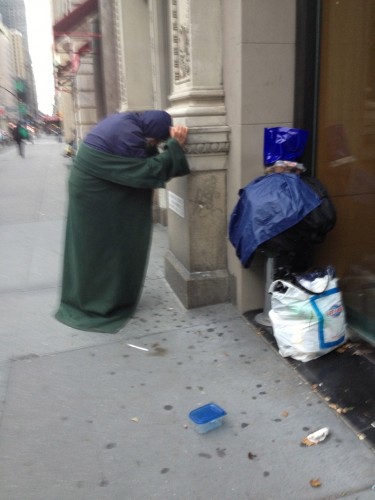 At this point I decided there is no way I was leaving this man there. In fact, I was shocked that anyone would. The little I could do for Derek was simply ordinary and humane. The help I offered was nothing praiseworthy at all, not even in relation to the complete neglect with which other individuals and our society as a whole treated him and others like him.

Derek was sick and needed help urgently. He asked me to help him walk from beside the bench to the street because had to pee and didn’t want to relieve himself on the sidewalk or in his pants again in front of someone’s home. I helped him hobble arm in arm to the street, where he collapsed and passed out. I immediately called 911. This time, I stayed by Derek’s side until I saw the ambulance actually take him away. Derek was gone and all that was left were the pigeons eating muffins that someone had given him and the water I had brought him a few days earlier. 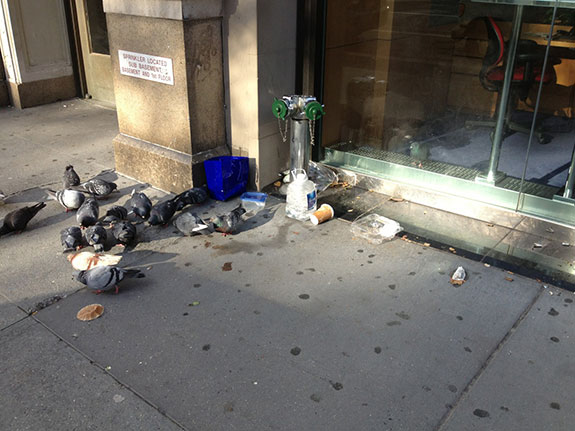 My new friend Derek taught me some important lessons that I will carry in my heart forever, and reminded me that our duty, our “right path” as individuals and as a society is right in front of us, if we choose to open our eyes.

Sandy also hit home in an even more personal way. I learned Tuesday evening, while trying to make sure that Derek was taken care of, that the home of my great aunt and uncle in Coney Island had been devastated. My relatives are in their 80’s, and although they didn’t evacuate Coney Island when they should have, they at least relocated to their daughter’s nearby eighth-floor apartment.

But the power there had been knocked out, too, and since my great aunt and uncle cannot walk, they were trapped eight flights up with barely any food and water. Everything around them in Coney Island had been destroyed by the hurricane, and the devastation was everywhere.

So on Wednesday, after seeing Derek taken away in the ambulance, I met up with my parents to bring food and water to my great aunt and uncle, and to others. Over the course of that day, I climbed more than 100 flights of stairs in various Coney Island apartment buildings to bring food and water to people in need. Many were elderly, trapped in high-rise buildings without sustenance and with no way to walk downstairs. 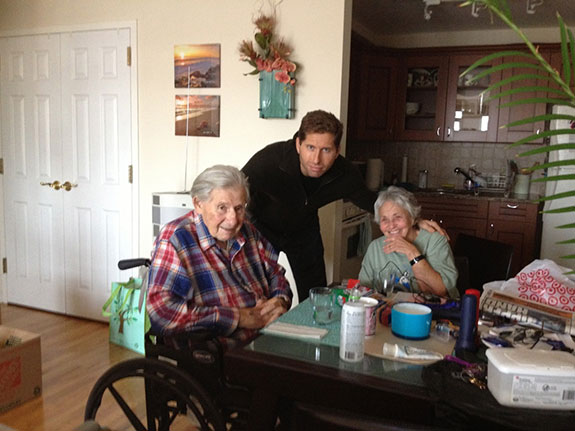 In one instance, I walked food and water up 20 flights of steps to my great aunt’s brother. When I walked into his apartment, he was completely disconnected from reality. He asked me if I was his guardian angel. I explained that we actually knew each other but had not seen each other in more than 30 years. He was elated to have food and water. In a heartbeat, he went from looking sick and hungry to being totally excited and alive. His smile served as a poignant reminder that very little effort can have a huge impact in someone’s life. 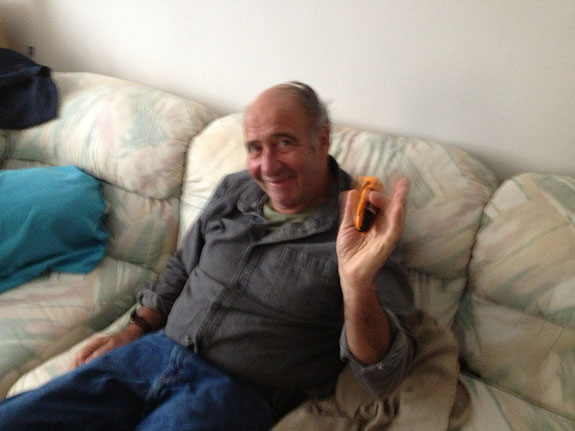 The day was in fact far too long and wild to describe, so I will let the photos do the talking.

As with Derek, I realize that what I did was not heroic. It was just the right thing to do, to offer in any way that I could. If anything, what I did for my family and others in Coney Island, as for Derek, made me realize with incredible clarity that I do an insufficient amount of service in the routine flow of my days, in the course of a life that is so blessed and that brings me such good fortune. 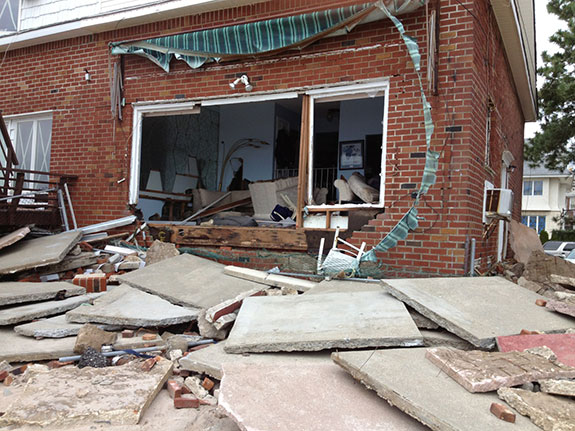 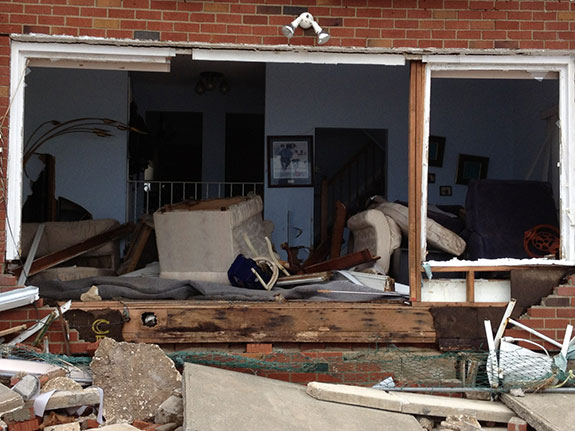 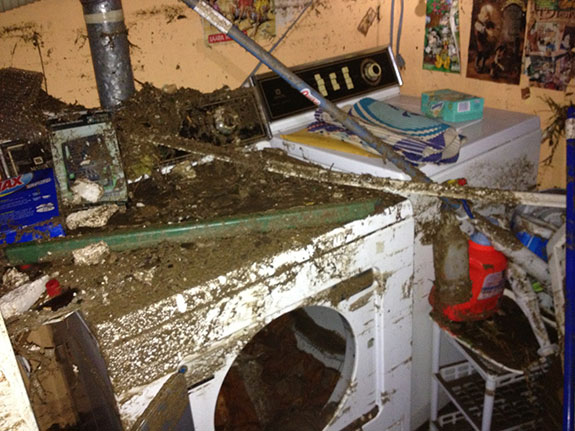 The profound irony is that even as I study and teach the lessons of taking “right action” from the perspective of ancient yoga philosophy and scripture that guide my life, my daily routine has led me pathetically astray from values I have held throughout my life, with the remembrance of how I can be of service to others right here, right now.

In fact, the weekend before Sandy hit, I had been teaching a Your Life Aligned® intensive centered on the Bhagavad Gita. Perhaps one of the most recognized scriptures in the world, the Bhagavad Gita speaks in detail to the issue of dharma, the Sanskrit word for one’s personal duty and responsibility in this life. But the reason it’s really so important to understand Dharma is because it enables both the social contract between people and the world of nature to resonate with a sense of purpose and order. The agenda of Gita is to understand the terms of the world and to understand yoga — how to yoke yourself to the world. The Gita encourages us to participate in a process of deeper understanding about the Art and Science of living in the world, and it starts by telling us to tend deeply to our responsibility as human beings on this planet.

Study of the Gita encourages us to contemplate what we consider to be valuable. What we believe is truly worth living for. Fighting for. Dying for. Our choices help determine how the world holds firm, how our society functions — or falls apart.

For me, a few days of helping people during a catastrophe is not nearly enough right action to fulfill my dharma. With this post, I renew my commitment to service. I hope you will join me in your recommitment to help others. We spend hours and years on our yoga mats cultivating virtues that must be put into action not only in times of crisis but every day.

I encourage you to take action to help those most affected by Sandy. Here are a few resources to get you started:

True yoga is action. Roll up your mat and your sleeves for a few days and do your practice in the world!