Please enjoy this fun article by Stephen Henderson, who participated in my Yoga and Service Project in Peru from December 19-26, 2011.

La Grama, a tiny town nestled in a gorgeous mountain valley of Northern Peru’s Andean Highlands, can only be reached by a road that’s called Trenta Tres Curvas, (Thirty Three Curves). It’s a dizzying series of switchback turns winding down through the Andes, until one finally arrives in a rural village that has spotty electricity, no mail service, and seemingly more dogs than humans. 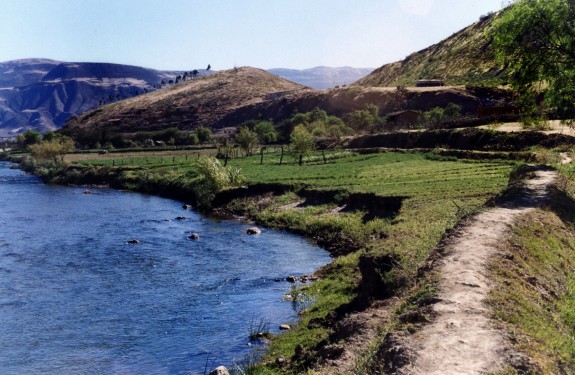 Downtown La Grama is a small grid, maybe four city blocks square, where a population of 300 live in one-story mud brick homes. The town’s roads are made of cinnamon-colored dirt that’s deeply rutted and pocked with large pot holes. In what seems a nearly comical touch, there are freshly-poured and quite elaborate concrete sidewalks bordering each side of these unpaved thoroughfares. It rains frequently here, though, and when streets melt into the consistency of pudding, these sidewalks are much appreciated. 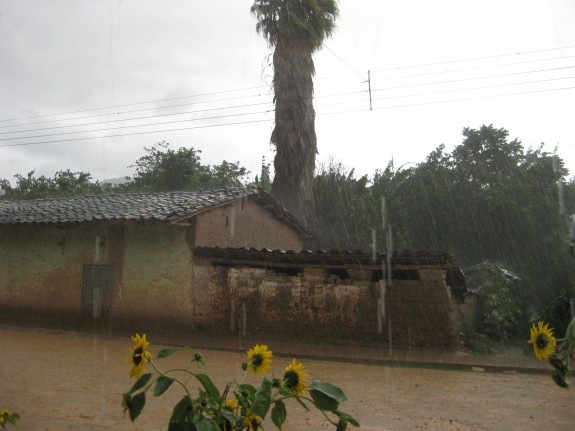 A decade ago, my friend and yoga teacher, Jordan Mallah, was a Peace Corps Volunteer in La Grama. Every few years since, he’s arranged a “service” trip where he convinces a group of people from the United States to come build a local library, or assist on a town-wide water project. The 2011 project was to plant an organic vegetable garden behind el colegio, the local grammar school. 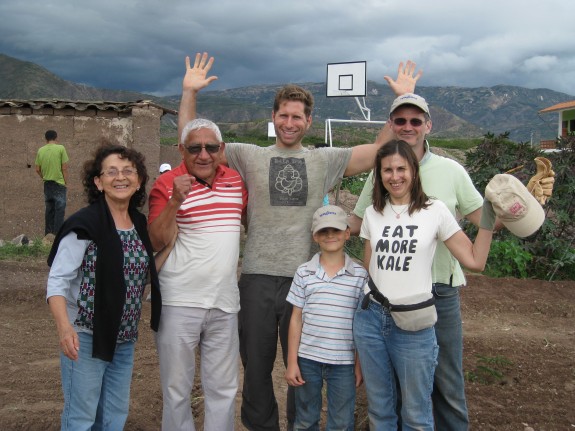 It all sounds benevolently imperialist, know-it-all New Yorkers imposing their (culinary) values on the third world. Sure, sure, I had my hesitations, too, at first. But, I decided to shake them off, and told Jordan I would like to help him, as did a dozen others of Jordan’s friends and clients. We traveled to Peru in mid-December, which was early summer in the Southern Hemisphere. 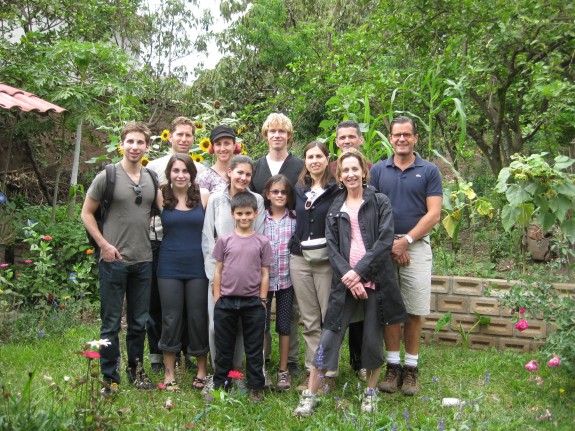 The people who live in La Grama are poor and, as a result, eat a fairly unhealthy diet. They mostly subsist on potatoes and guinea pig. You read that correctly: guinea pig. Hordes of these cute, but clueless-looking creatures scurry about (and shit upon) the dirt floors of most houses. When it’s dinner time, people shuck off a guinea pig’s fur, give it a quick chop, and into a pan the pieces go — head, tail, claws — every morsel is consumed. It tastes, I discovered, like the dark meat of a not-very-flavorful chicken. Not bad, but perhaps not as good for you as green beans, or Swiss Chard. At least that’s what Jordan thinks. Hence, this garden project. 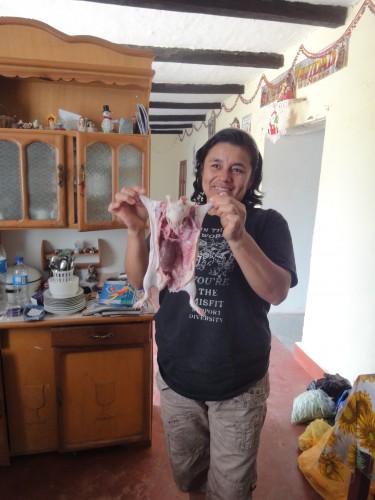 Our base of operations was the modest but hugely cheerful house of Jordan’s friend, Nattie. Something like the unofficial “mayor” of La Grama, everybody in town knows Nattie because she runs a Movistar franchise (it’s one of Latin and South America’s major telecommunications companies) from her kitchen, selling time for cellular phones. From dawn to dusk, five minutes do not pass without someone showing up at Nattie’s door. Never have I met someone so irrepressibly hospitable. To have a group of Americans descend on her house for a week, not to mention cooking three meals a day for all of us, appeared not to faze Nattie in the least.

On an earlier trip, Jordan convinced Nattie to stop breeding guinea pigs and, instead, to plant vegetables in her backyard. Nattie’s beets, carrots, and zucchini, among countless other plants, were thriving. I’ll admit, I’d been worried about the feasibility of an organic garden until I saw these marvelous examples of local produce. 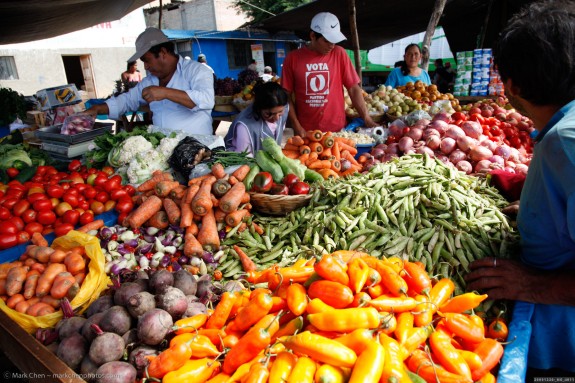 When we first saw the field behind el colegio, however, my fears returned. It looked like the town dump, was choked with weeds, and ankle-deep with garbage. As we surveyed the spot, there was much discussion about the rocky soil, as well as the ground’s steep incline. And what about water? Jordan explained that he’d convinced some of the folks at Peace Corps to donate money for a small pump, which would keep things moist during the driest months. Up until now, people had jury-rigged a “irrigation” system, burying empty plastic bottles among the plants, each with a pin hole at their bottom, so water inside would seep more slowly into the ground.

Jordan assigned tasks, and distributed shovels, pick axes and wheelbarrows. We got to work tilling the land, breaking up hard clods into a more malleable layer of top soil. An old woman worked behind us, gathering up whiskery weeds we unearthed. She then patiently arranged them into neat bundles which she would dry, and turn into brooms. Several pretty young girls from the school had showed up, too. Their idea of “work outfits” was adorably misguided, as they were resplendent in flip flops, tight jeans and halter tops. I chatted with them, trying to summon back the Spanish I’d learned when I was their age. Our shared smiles, though, and the fact we were all laboring together, side by side, was our best form of communication. 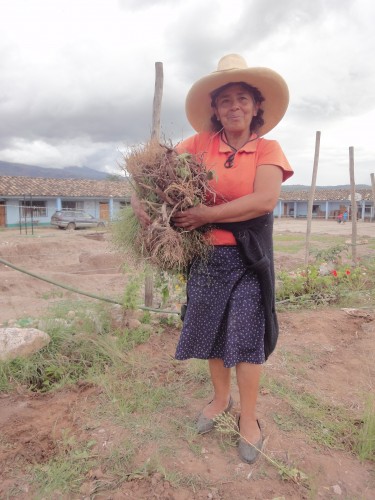 At one point, I was astonished to overhear these senoritas talking, and one of them asked the time. One girl gazed up at the sky, and said, “it’s probably about 4:30 p.m.”  I looked at my watch. It was 4:27. Clearly these young women live in closer harmony to the earth’s natural rhythms, than I do in Manhattan.

After several days of preparatory work — clearing away large rocks, and creating a series of raised, rectangular beds — it was time for planting! Jordan gave everyone a brief lecture on biodynamics. Arrange seeds somewhat randomly, he advised, not all lined up like soldiers. The bigger the seed, the deeper in-ground it is planted. All this was news to a city slicker like me. 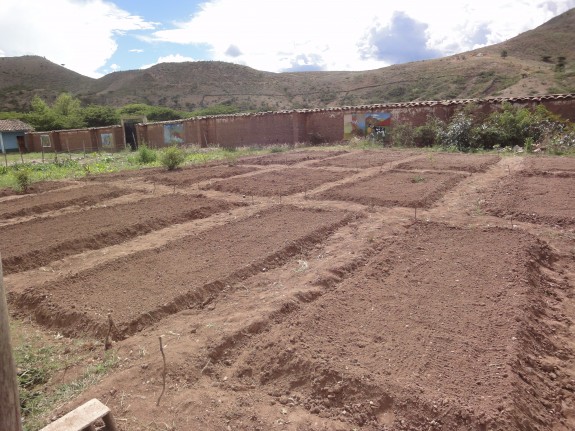 Several dozen children showed up for planting day, and I asked three boys to help me: Carlos, Franklin, and Angel. They were probably 14-years-old, and full of giggles and squiggles. Indeed, nearly everything I did or said caused them to react with exaggerated shock, and then to collapse into fits of laughter. It was hilarious, of course, as my Spanish vocabulary for describing spatial considerations — depth, distance, orientation — was quite limited, so I relied heavily on pantomime. Angel, Franklin, and Carlos were clever young men, however, and took the seed packets from me, and quickly showed me how it was done. Um, who was helping who here?

When we were ready to water our beds, the pump, for some reason, was nowhere to be found. So, a chain of hoses were stretched from the garden back to the school building, where there was an outdoor spigot. These hoses, alas, were old and worn, and not spliced together with screw-together junctions. Rather, the end of one hose was simply pinched, and shoved into another. Every time we stretched it even a foot longer than it wanted to go, the different sections of hose would slide apart. Water gushed everywhere, except into the garden. This caused still more shrieks of laughter from the children, and much head-scratching for the adults.

Just then, however, dark clouds appeared on the horizon, rolling quickly towards us over the top of nearby hills. Skies quickly changed from blue to black, the air temperature dropped just as rapidly, and … Boom! Rain was rocketing down around us. The Peruvian kids scattered at the first drop, but we Americans were too grateful to move. If there is a God, She or He seemed to be giving a (green) thumb’s up to this project.

It’s now late February, and Nattie called Jordan recently to let him know the vegetable garden behind el colegio is thriving. This was the best news I’d heard in a long time.

Stephen Henderson is a freelance journalist, based in New York City. He’s currently working on a book about the different ways poor and hungry people are fed around the world, and is compiling his research at www.cookingforothers.com 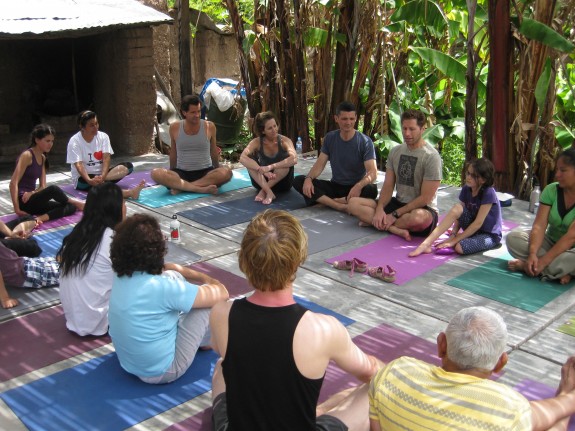 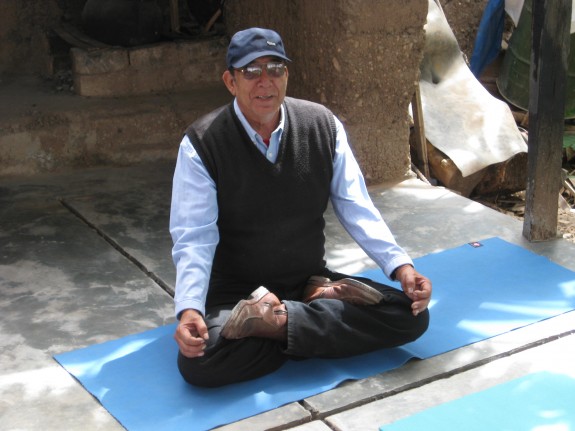